Ferrum is a DAG network offering interoperability with other networks, and includes a DEX, mobile wallet, and fiat on-ramp.

There are countless DLT projects that claim to be performant and support tokens/other asset classes. However, they are all struggling to get adoption and usage. While Ferrum is newer and has less exposure to the market, most existing competitors are not far ahead.

Most other projects depend on external exchanges for listing, and do not have direct fiat onramps. Ferrum has 4 planned methods:

Every Ferrum transaction needs to present a proof of work.

[Users can] add weight to their transactions by spending FRM instead of, or in addition to, proof of work.

When FRM is used to execute a transaction, the token is burned.

The tokenomics seem pretty simple - a twist on the standard PoW. However, I’m not sure how a proof of work can be bundled with a transaction. 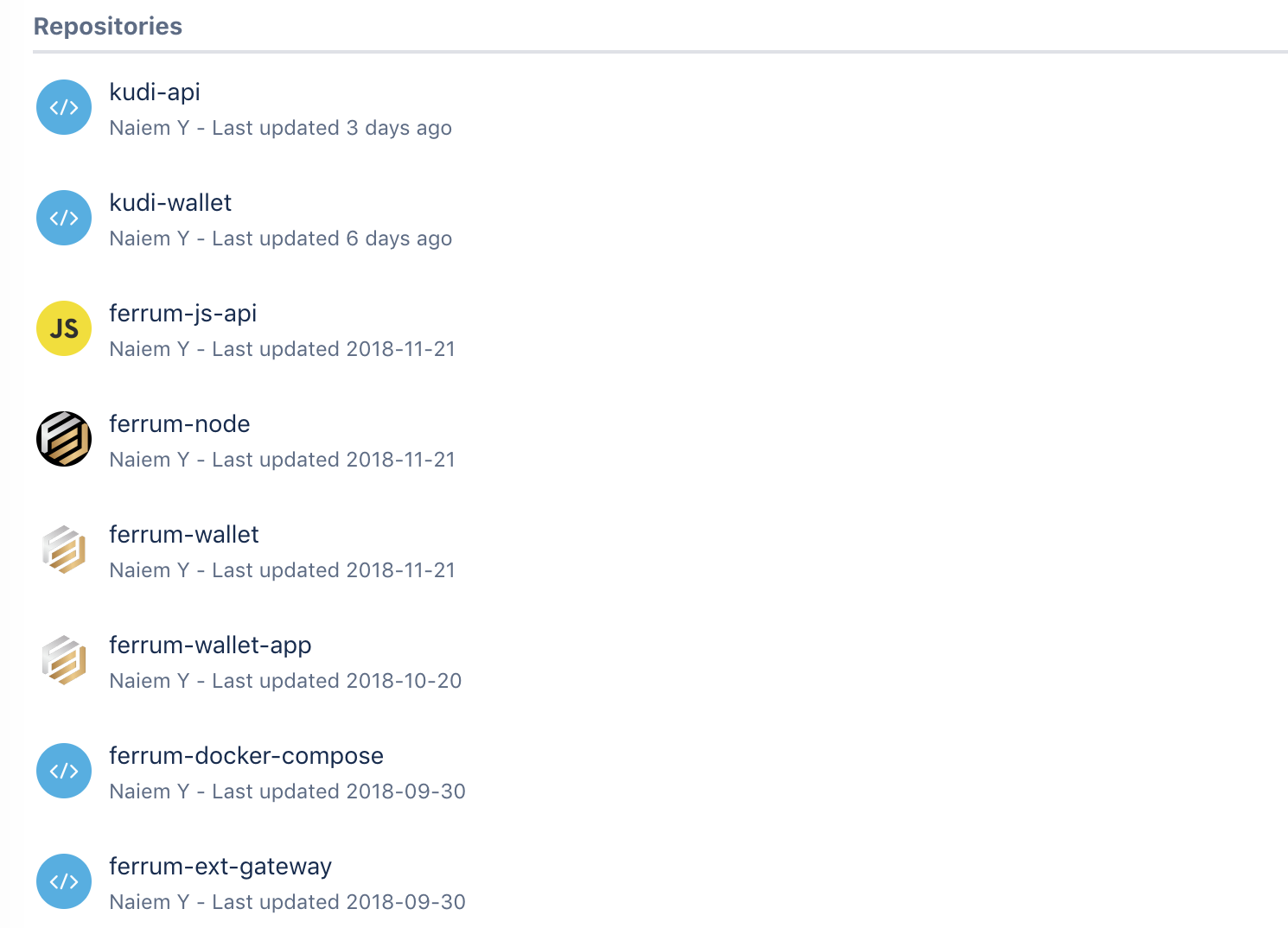 This repo contains gateways that are used by the Ferrum Node to talk to outside world. This is to help unifying the APIs both for wallet and node use.

Currently, only a Ripple gateway has been developed. Written in Typescript, the code liberally uses the newer features of Javascript such as classes and async/await.

The main concern I have with this design is that it provides a single point of failure, in the following code (within RippleApi.ts): 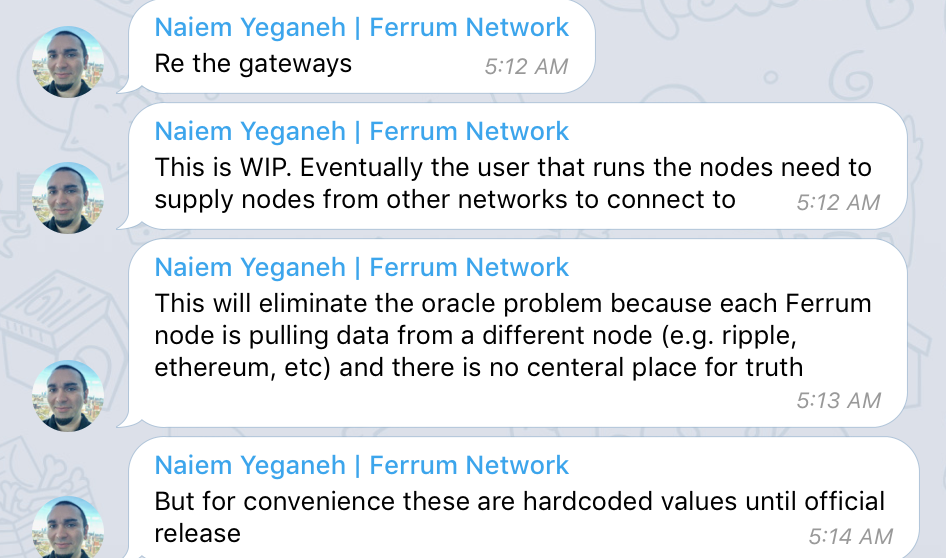 More explanations at the end of the review. 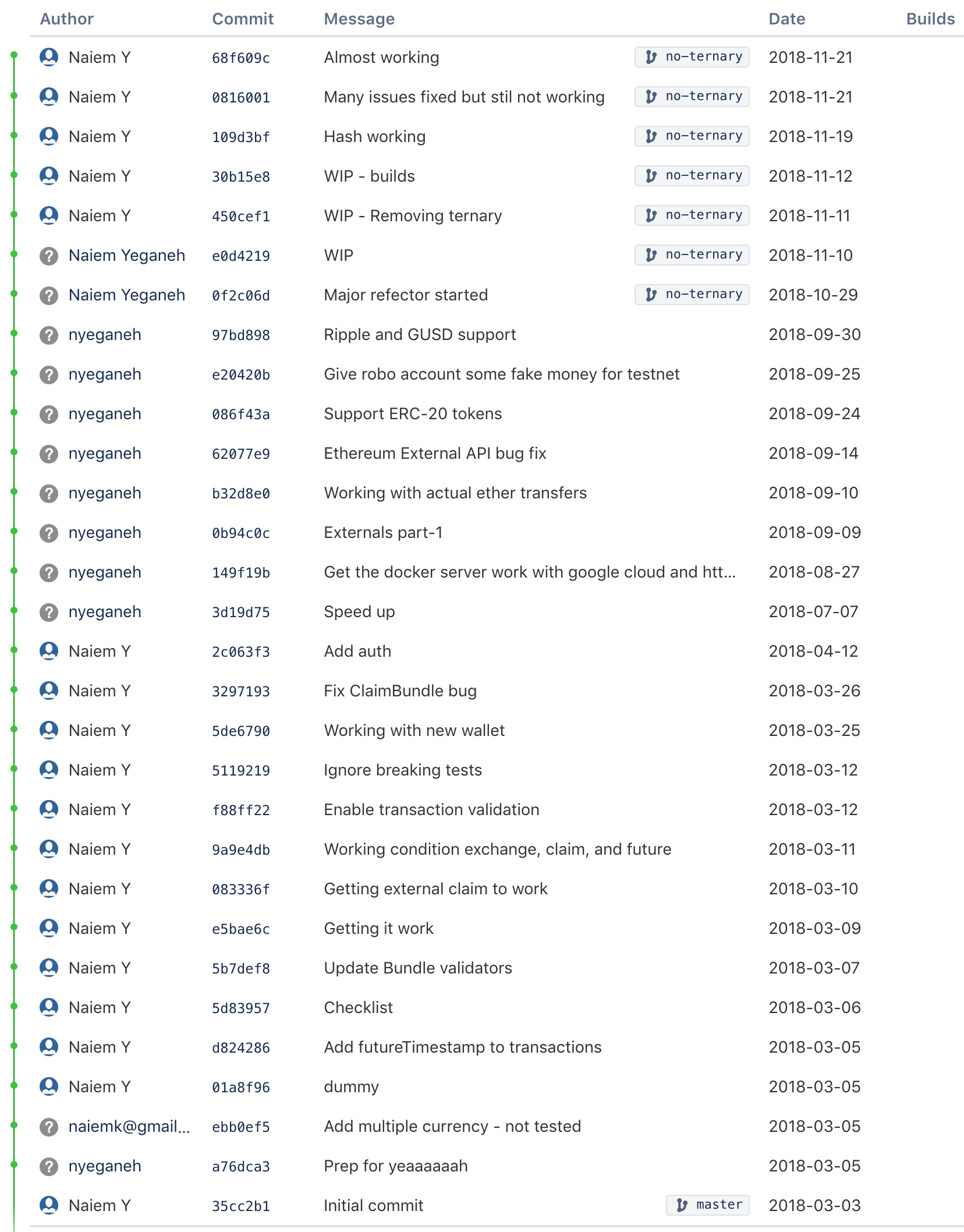 Here are the stats of the no-ternary branch: 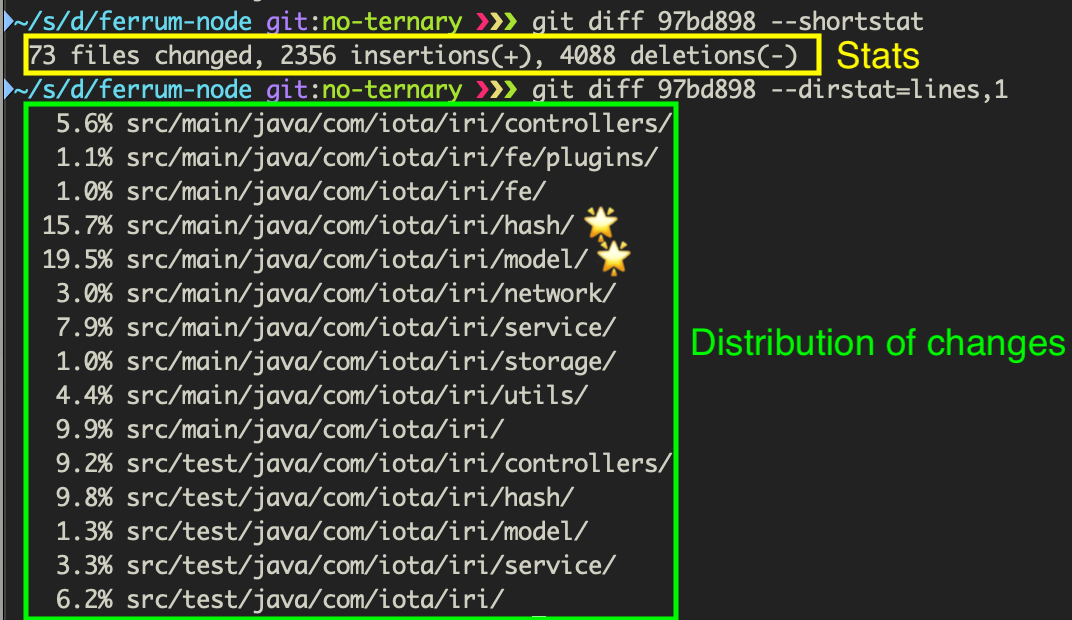 In the results, the first column is additions, and the second column is deletions. Looks reasonable – a quick double check of the files shows that most of the hashing functions have been replaced by very commonly used Keccak Sponge functions. 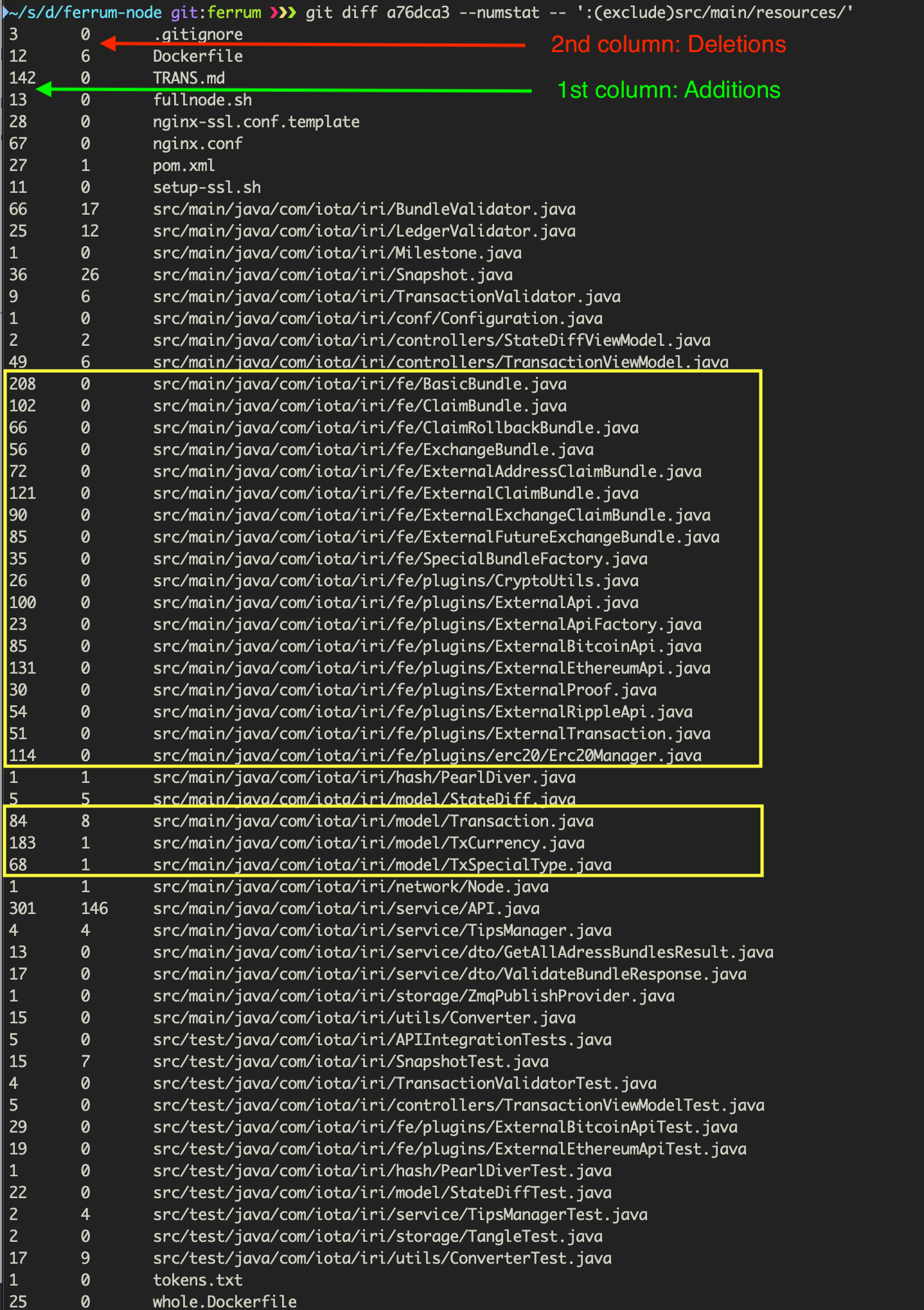 The biggest changes are adding the Ferrum specific files as highlighted in the picture above, and modifying the other files to be compatible. You may notice that src/main/java/com/iota/iri/service/API.java also seems to have many changes, but checking the actual difference in the code, it looks like mostly whitespace changes rather than functionality changes. TRANS.md is an architecture doc and todo list.

The files that end with Bundle.java look good to me. I’m not very familiar with IOTA bundles, but taking a look at the Bundles documentation, they look like reasonable implementations.

Edit, based on team response:

These two were the original design. They are being moved to the gateway nodes such as Ripple

More explanations are at the end of the review.

Another file that is a work in progress is TxCurrency.java, where it’s still a hardcoded list. 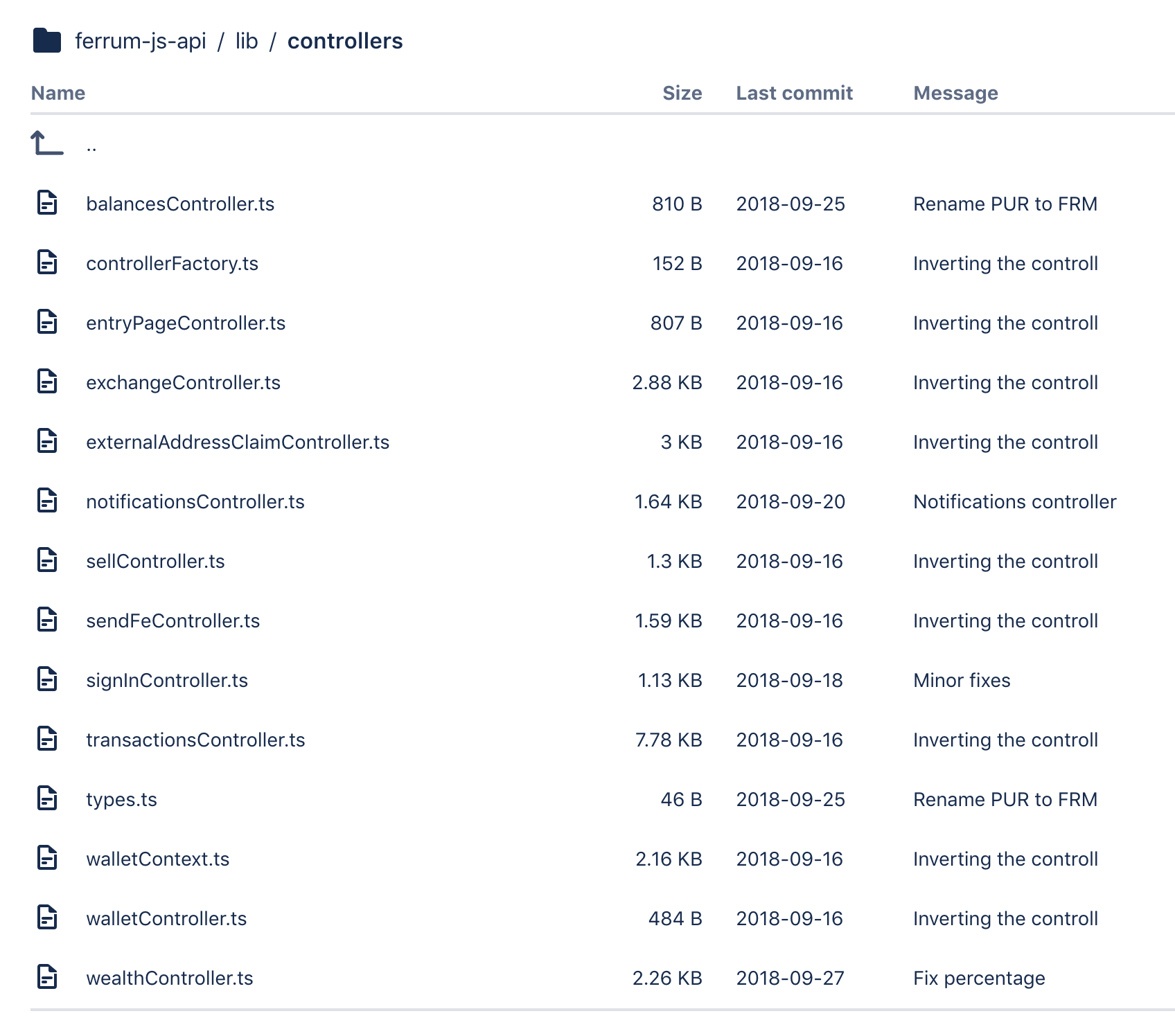 This repo does not include tests yet, but as just an interface to the Ferrum network, it’s not super critical at this stage.

Web wallet for Ferrum. Made with React. Contains functionality for the following features: 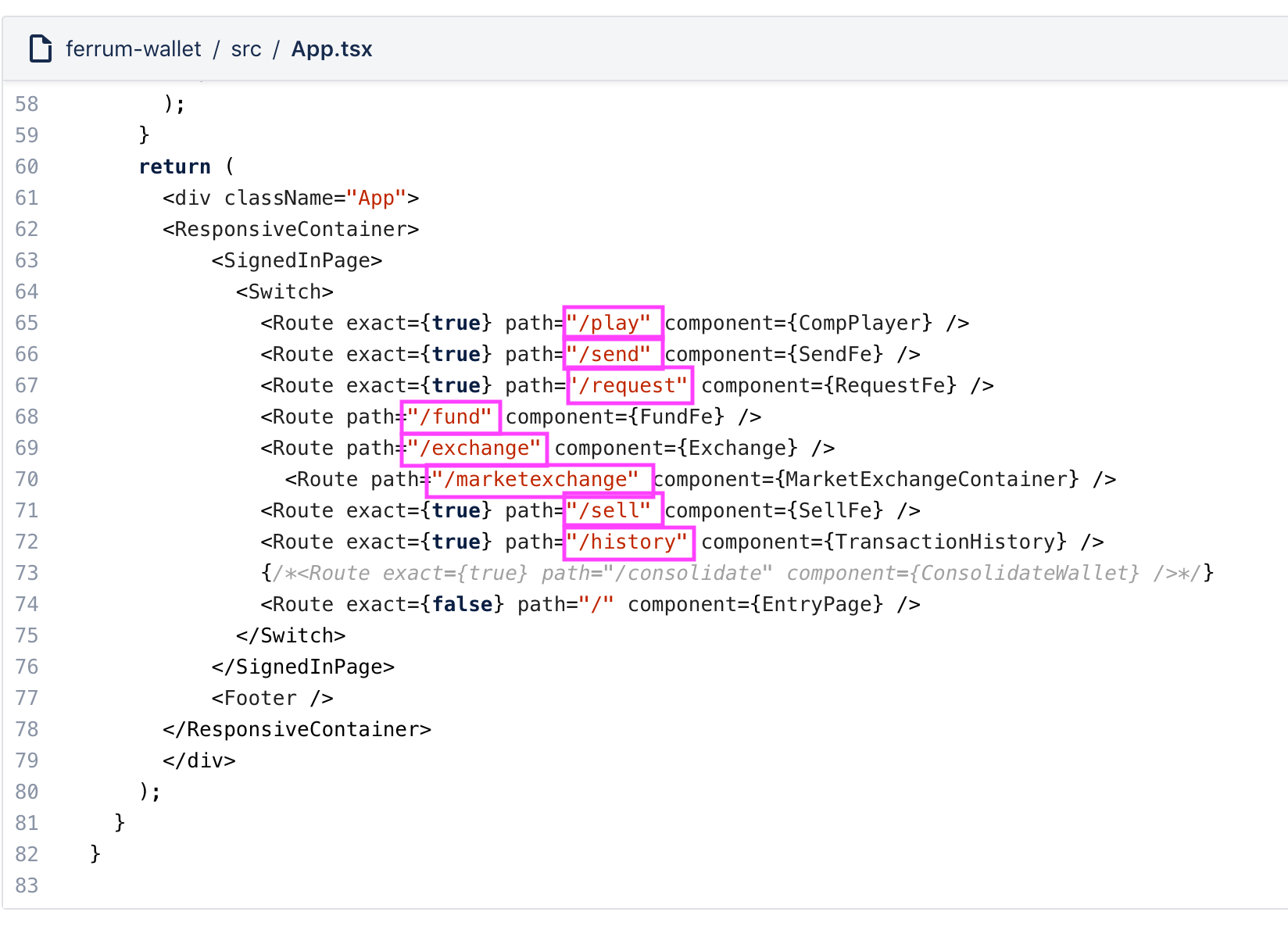 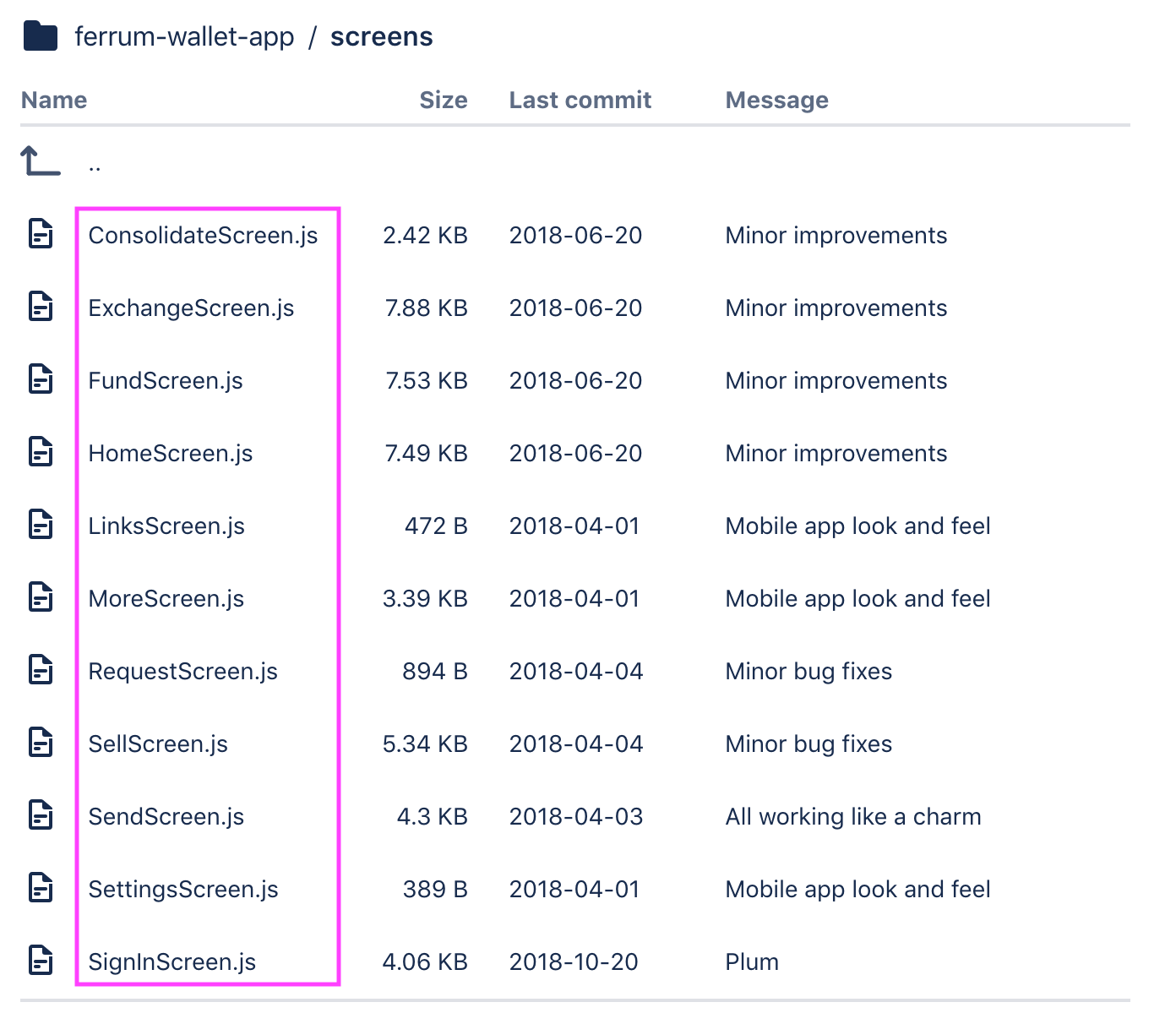 Uses docker-compose to set up ferrum, dex, dex bot, and gateway-ripple. Seems outdated due to the mismatching repo names to what is available, but it’s just a config file that can be updated in 5 minutes so not a big deal.

A proof of concept of sub-0 client. React native app.

Ferrum is competing in a tough space technologically, but differentiates itself by demonstrating good business development progress and onboarding advisors that can actually help in terms of adoption in geographically diverse locales.

The code is architected in such a way that demonstrates Naiem’s engineering experience. While it should be cleaned up and made developer friendly at some point, the team has made it clear that it’s pre-release. The git commit messages are clear and concise, which is a good sign that there was some time spent on making the codebaseo maintainable long term.

It is interesting to note that all the git commits are by Naiem, the CEO (this may be due to git rebasing, so not much insight here).

…The external data is not pushed to Ferum by oracles. Every single node connects to random external nodes. This will be effectively as every Ferrum node is also a node from all external nodes. E.g. Once you run a Ferrum node, you run an Ethereum, Ripple, Bitcoin, etc node with it that Ferrum talks to.

Obviously this would be too expensive and not everybody will do that, although is an option and can be done. To take the specific example of Bitcoin, assuming there is 1000 Ferrum Node, they would be connected to 1000 different Bitcoin nodes. For an adversary to present a fake transaction, it should hack a significant percent of the Bitcoin nodes that Ferrum nodes connect to. Another problem that adversay has is that it doesn’t know which Bitcoin nodes are used by Ferrum nodes so the adversary should hack majority of the Bitcoin network to be able to fool Ferrum nodes to get a fake transaction through.