Elrond is a blockchain and decentralized application platform that aims for more than 10k transactions per second, minimal latency, negligible fees, and interoperability. Elrond implements adaptive state sharding, which allows the network to scale linearly - the more validators, the more throughput and data it can support.

The consensus group is secured by “Secure Proof of Stake” and random selection using BLS single signature, where the current leader signs the previous random source with its own private key to generate a new random number. It assumes that 2/3+1 of the eligible nodes are honest (similar to many other blockchains).

On 29 May 2019, Elrond released its testnet at http://testnet.elrond.com along with a blog post detailing the update.

*Update 22 June 2019: Since this article was published, Elrond has fully opened the source of their code.*

1/ ZERO TO ONE - MAJOR MILESTONE FOR THE BLOCKCHAIN SPACE

Elrond testnet has been released yesterday, validating that Adaptive state sharding and Secure proof of Stake work at scale

Just take a look at this beauty: elegant, clean and fast: https://t.co/4VC0f8P5Bs pic.twitter.com/9ww5M6kTr3

The token metrics look great in this market, in my opinion. Having a larger IEO than private round means there’s less centralized sell pressure. The hardcap, at $5.15MM, is sustainable by this current market. The inflation and deflation models make sense.

Zilliqa, Algorand, Ethereum 2.0 (Serenity), and Multivac are competitors. While there are many technical details on how each implementation is different, and compete on throughput, scalability, and security, ultimately what they’re competing on is providing a platform that offers an easy way for developers to build reliable products.

Ethereum 1.0 is the clear winner in this regard so far, giving it the advantage of network effects; however, there is a huge unaddressed market of potential products that require higher throughput and scalability, with lower costs to use. None of the current solutions have achieved the levels of adoption that would prevent Elrond from getting there first.

The advising team includes an Ethereum core dev, a computer science professor, cofounders of City of Zion and NEX, and a VP of engineering.

Elrond has been self-funded so far, and is fundraising after already demonstrating a proof of concept and another iteration. There are some technical/economic competitive advantages, such as low computational requirement and low network participation costs, which also help in terms of potential adoption.

In my conversations with the team, they clearly understood that competitive advantage isn’t just about the tech, but also about navigating the crypto ecosystem, gaining niche then mainstream adoption, and building a constructive development community.

Elrond token, ERD, is a utility token that will be used as: -a unit of payment and settlement between participants in the Elrond Network -a unit of staking to validate transactions by masternodes

Sharding is a way to horizontally distribute storage and processing loads, to increase performance with scalability. Elrond accomplishes this with a method dubbed “adaptive state sharding.”

Sharding implementations have to deal with a variety of issues stemming from the complexity. The Elrond whitepaper puts it succinctly:

Sharding introduces some new challenges like: singleshard takeover attack, cross-shard communication, data availability and the need of an abstraction layer that hides the shards

To address these, Elrond uses a tree structure, where the shards from the last tree level also must hold the state from their siblings. This improves performance when sibling shards merge, since they already have the data. 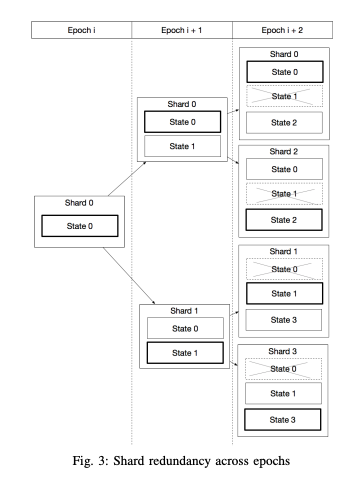 In addition, for each epoch, a third of the nodes are uniformly redistributed across shards, thus preventing cartels from dominating a single shard.

I think that makes a lot of sense.

The probability of signing two consecutive malicious blocks is ~10^-18 without the fisherman challenge.

Shard takeover is possible only if the malicious group has super majority. The probability of this in case of 10 shards and 25% of total nodes malicious is 2.88*10^-78 without the fisherman challenge.

SPoS is provably secure even if the malicious group is highly adaptable, and bribing was considered as well.

Probability of shard takeover with fisherman challenge is: 10^-211.

Elrond includes a metachain to notarize all network and global data operations, such as nodes joining/leaving the network, eligible validator lists computation, shard-specific consensus, handling valid/invalid transactions, etc. Every round of every epoch, each shard sends headers and proofs to this metachain, on which consensus is run. Then, shards may request information from the metachain to process cross-shard transactions.

At the end of epoch e+1, nodes drop the body of the previous epoch’s state block (containing the hash of the Merkle tree’s root), and all blocks preceding it. Therefore, new nodes do not need to download full history; they can start from the last valid state block.

The team wrote a prototype in Java, tested it, and determined that they needed to rewrite it using a faster language. I love this pragmatic approach – proofs and whitepapers only get you so far, but building and testing and iterating is a sign of experience. I saw test files for every significant component of Elrond! 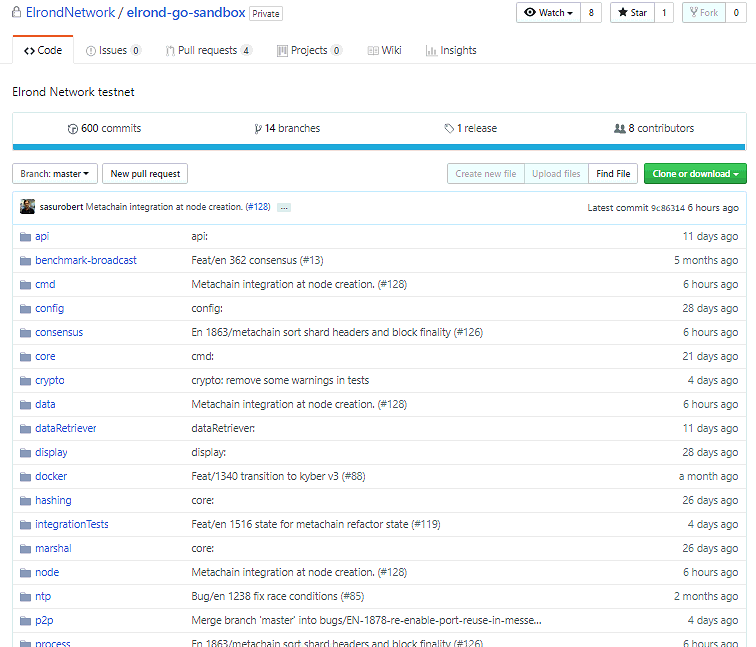 The following picture is of the recent pull request history (proposed and approved changes). Their iterative process is very clear as every issue and every pull request is linked to a Jira ticket. 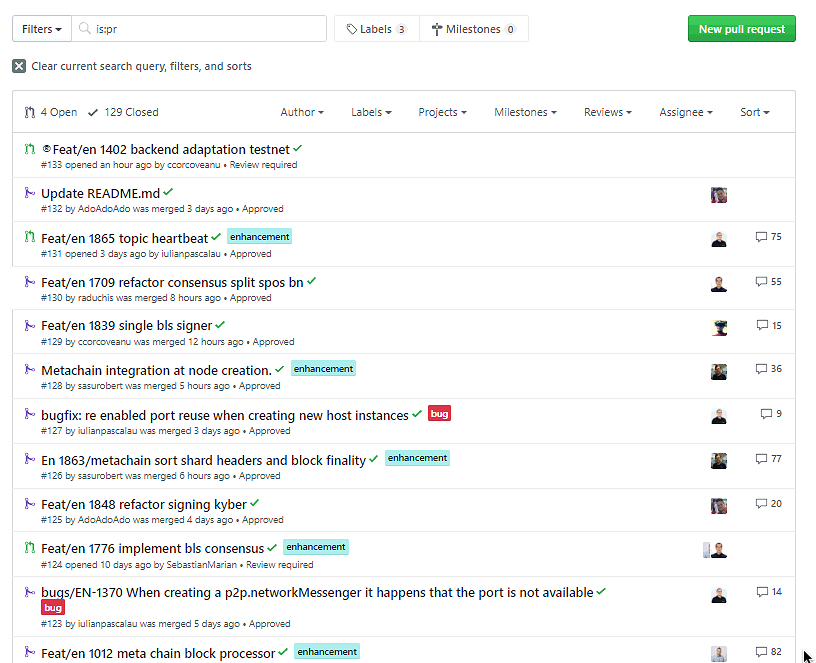 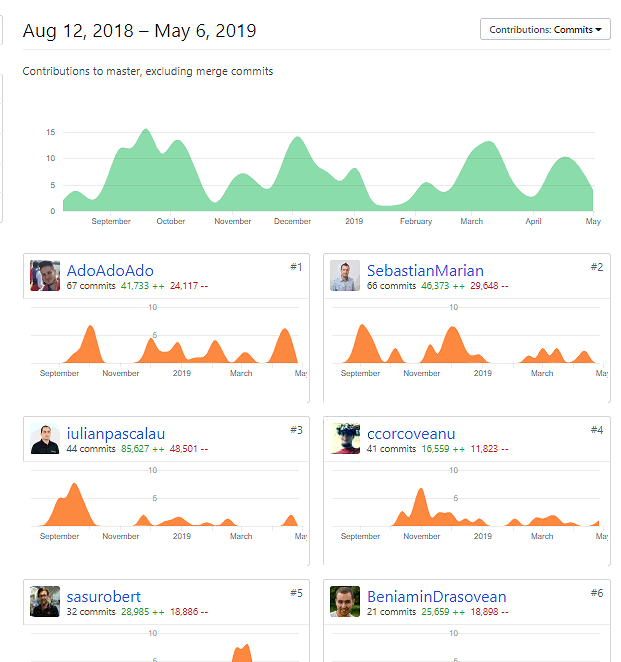 The seednode is a service for network discovery, and is an entry point in the network for the other nodes.

Looking at at /cmd/seednode/main.go: it creates a new random number, then creates a net messenger which does some p2p discovery using dht or mdns.

Consensus: defines the SPOS - reducing the necessary communication rounds from 5 to 2, and communication overhead from O(N^2) to O(N).

Update 07 June 2019: BLS multi-sig is already implemented and live in the testnet.

Data: defines basic types, data structures which are needed for processing: block, header, metablock, transaction, etc. It also holds the merkle tree implementation to hold the state of the blockchain and account. Unfortunately this is something I’m unable to test, but according to the team, Elrond has a new implementation of patricia merkle trees which is 40% faster than the trie in Ethereum and faster than any other implementation in wide use in the crypto space..

Node: connecting high level components to each other.

Transaction sharding can be seen in process/block - here you see the core block processing units for shard and metachain as well. 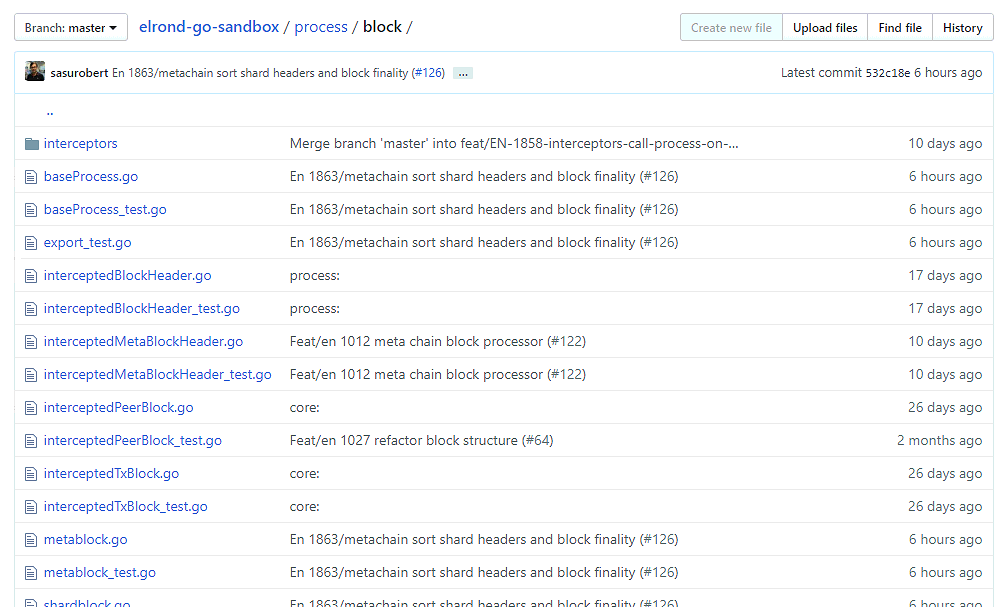 Aside from these entry points, there is another key directory:

sharding: Holds a multishard coordinator, which handles the state data according to the binary tree model described in the whitepaper. The nodes shard coordinator is currently in progress, and utilizes a fixed number of shards rather than calculated dynamically. The selection of validators for consensus groups is done in each shard according to the randomness as described in the paper, but is currently part of the consensus code. The team says it will be refactored soon into the nodes sharding coordinator.

K is a rewrite-based executable semantic framework in which programming languages, type systems and formal analysis tools can be defined using configurations, computations and rules.

Grigore Rosu, one of Elrond’s technical advisors, started K framework in 2003 at UIUC.

Elrond added a Golang backend K framework, which is used to create a virtual machine for smart contracts.

Check out this small subset of publications that have included K framework:

In a fruitful collaboration with Prof. Grigore Rosu’s Formal Systems Laboratory (FSL) at UIUC, Runtime Verification (RV) has used the K framework to successfully build and test a mathematical model of the Ethereum Virtual Machine, which makes it possible to formally verify the accuracy of smart contracts.

These are the prototypes done in Java. They haven’t been updated since Nov 2018, but gave the reason for the team to rebuild in Golang.

The Elrond client is made from Reactjs (Electron) and javascript. Works standalone and in browser.

Overall, I really like Elrond. My first call with them showed me that they had a great depth of knowledge not just about blockchain tech, but also so many other things: on how to manage a growing team, the importance of the non-tech side of startups, and even the intricacies of the quickly changing crypto industry.

After looking at the public and private code, along with their project management system, I can confidently say that the team knows what they’re doing. The level of detail, planning, and testing demonstrate a lot of experience handling large projects with large teams with the end of goal of creating something new and useful.

Lucian Mincu, [May 1, 2019 at 11:00:38 AM]: the key management and flag configuration for starting ./node has been changed as well, this was only for testing purposes not for production.

Lucian Mincu, [May 1, 2019 at 11:01:19 AM]: so everything is right now in place and we’ll have a key management system integrated before the testnet release