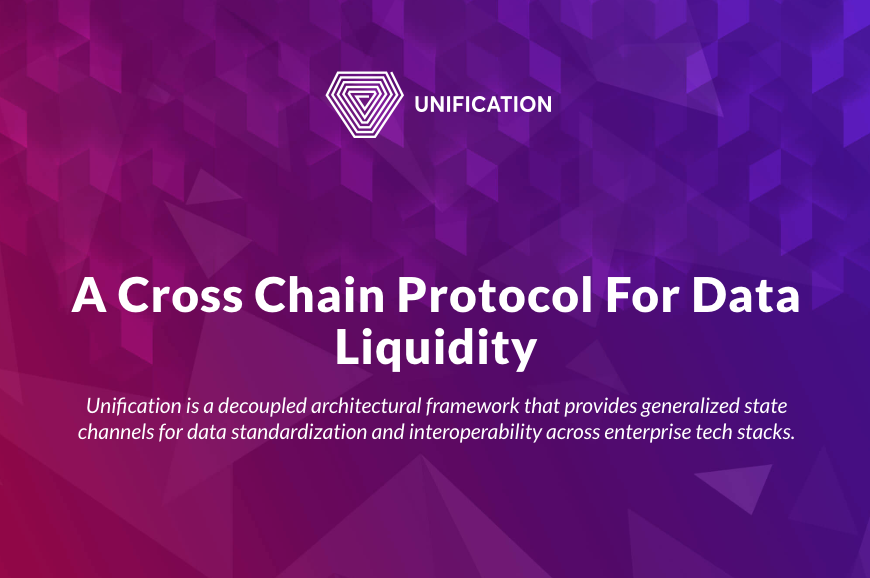 Unification is a decoupled architectural framework that provides generalized state channels for data standardization and interoperability across enterprise tech stacks.

In other words, Unification is a framework that companies can use to quickly standardize and commercialize their existing databases. It uses blockchain only for settlement and metadata, while data transfers are done off-chain.

There are 3 types of users: Data Providers (apps/enterprise), End Users (you and me), and Data Consumers (researchers/advertisers/enterprise).

Note: I am an advisor for Unification.

Ocean Protocol (“A decentralized data exchange protocol to unlock data for AI”): Very similar feature set, but Ocean has its own blockchain. Ocean also allows data consumers to bring AI models to the data to generate the results without needing to see the data. However, Ocean does not offer semi-automated data standardization, or efficient onboarding for enterprise, and does not give End Users control over their data. There is no framework for permissions and consent. Ocean has a partnership with the Singapore government, but no working product yet. Ocean tokenomics is based on a staked curation market ranked by availability and usage. From my understanding, Ocean Protocol’s AI backend is actually SingularityNET.

The staking model of data in Ocean is not only for availability/transfer but also for the ranking/popularity of the datasets. Unification does not incentivize staking for ranking datasets, which aligns Data Producer and Data Consumer interests.

Datum: Data is stored on chain.

Ocean Protocol seems like the closest competitor in terms of features. Unification has the advantage of go-to-market speed due to being a protocol, not a blockchain. Unification also provides an SDK with extensive documentation to make onboarding much simpler and more feasible, and the advantage of giving End Users the control of where their data can go. Ocean Protocol’s beta is planned to be released Q4 2018.

There are 4 major pieces to the project:

There are 7 repos, some public some private. 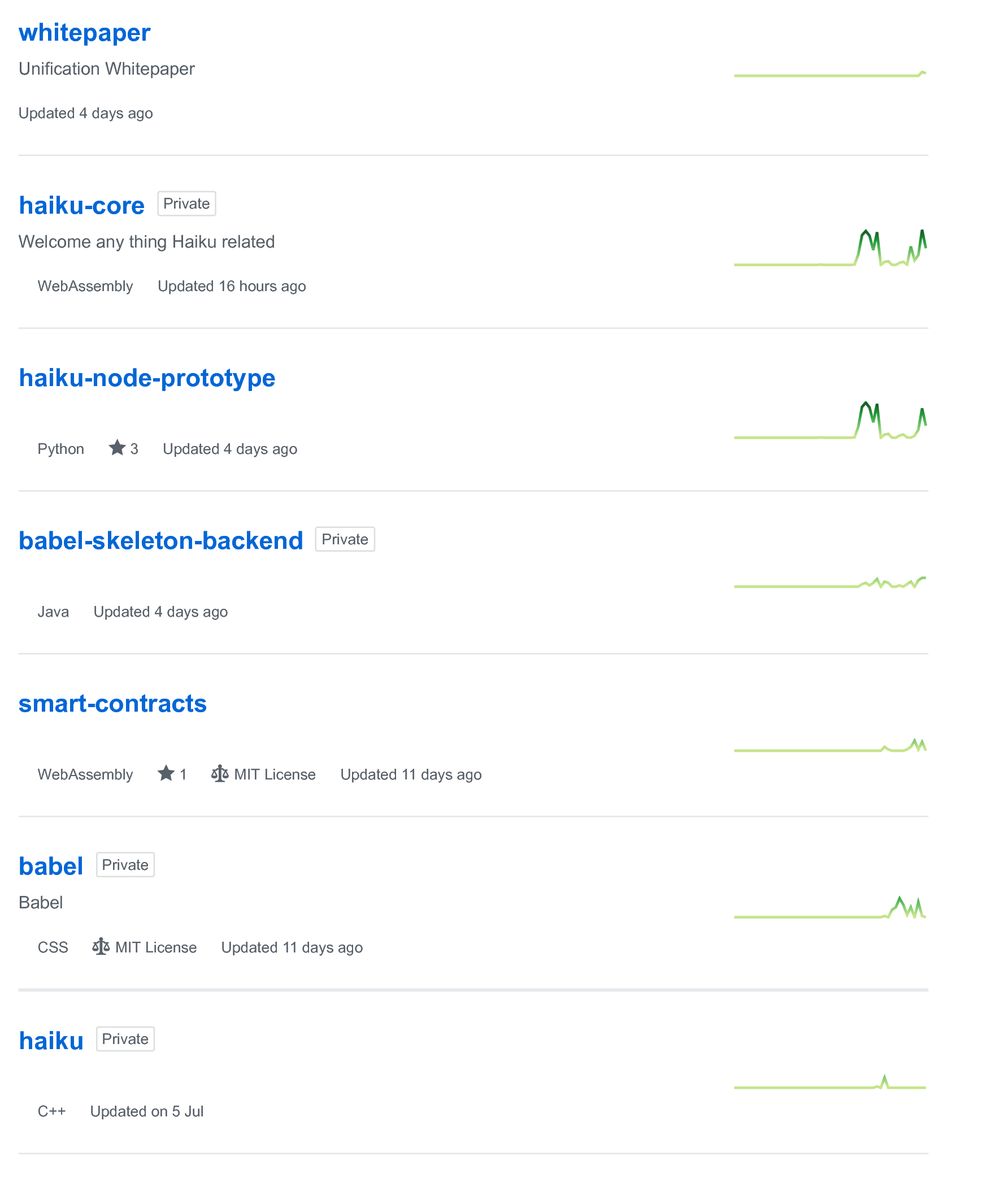 haiku-core: Private repo where most of the current active development is occuring. 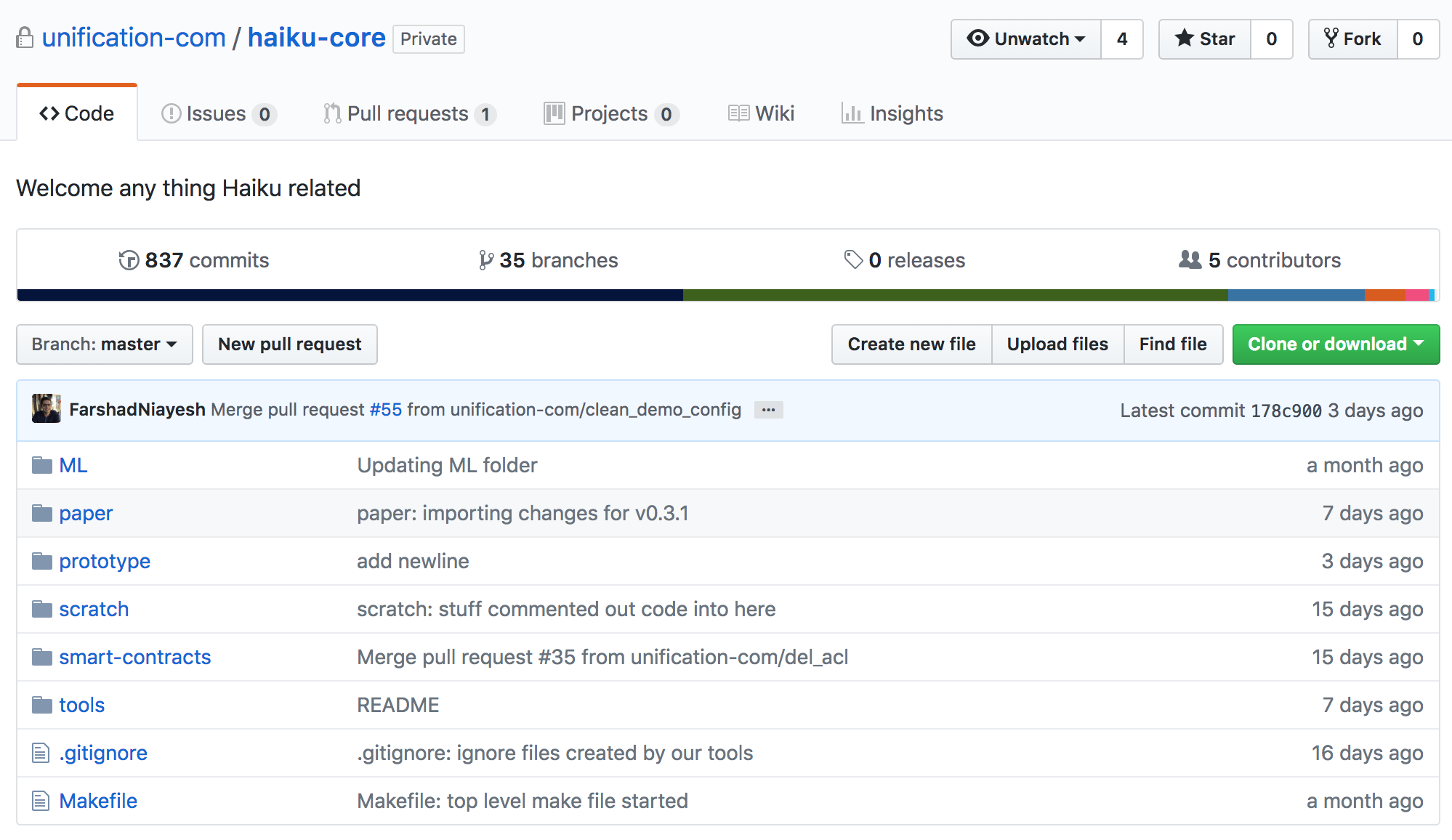 Contains the Haiku prototype code, smart contracts, as well as the ML algorithms research/development. This repo contains the daily commits, with stable PRs/Merges being pushed to following repos.

There is a note stating the following:

This is a Prototype/Proof of Concept, and is not the final, C++ production code. The prototype has been written in Python to enable the rapid development and testing of new features and concepts, and to refine the Unification Haiku Node specification. 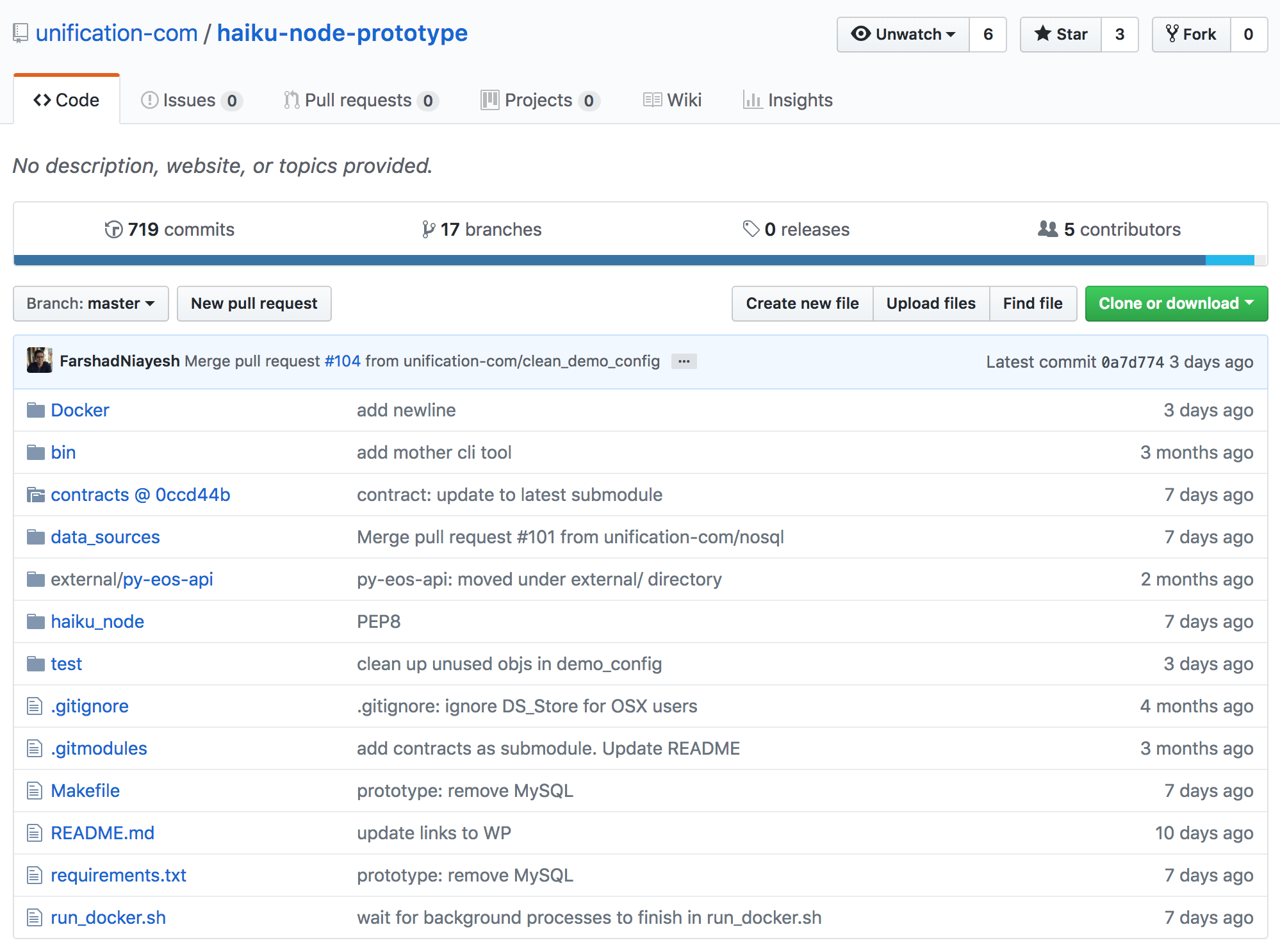 The readme has a link leading to a wiki, which contains

I like the amount of documentation for developers to get familiar with all the moving parts of the system — this is super important for gaining a non-speculator community.

The code in /Docker and /bin show that the bulk of the business logic is in /haiku_node, where haiku starts from main.py, mother starts from mother/cli.py, and babel starts from babel/cli.py.

mother: functions to validate, invalidate, and list UApps based on validity.

haiku: starts and serves an RPC server, and implements functions to fetch encrypted data from a data provider and decrypt it. This contains both Haiku Server and Haiku Client (client.py contains more client implementation). There is also a basic UApp Store implementation, which is an additional method (in addition to “Fetch”) to initiating a data exchange.

Other interesting files and notes

rpc.py: This file works between the haiku executable and the Data Provider’s data. For the proof of concept, UnificationDataFactory looks like it only reads from a sqlite3 database. The team tells me this previously supported ODBC but was was migrated to sqlite3 for unit testing purposes, and will eventually support any ODBC connection in the future.

There are several other helper files in the repo, including those for interacting with the blockchain, encryption, and checking whether a UApp is valid.

smart-contracts: Smart contracts for the prototype.

eosio.token/eosio.token.cpp: UND token for the EOS version on the protocol. Pretty self explanatory.

unification_mother/unification_mother.cpp: Unification Mother contract. Has functions to register, validate, and invalidate UApps to the registry, as well as checking for UApp validity and reading the UApp registry data.

This is a pretty standard Angular web app. It starts at public/scripts/app.js with a router and renders all the views in public/views.

This repo is where the C++ production version will live. While the Python-based prototype is in very active development, the C++ version is still reasonably early since Python is much quicker and easier to prototype with.

whitepaper: Public repo which contains the latest published PDF of the tech whitepaper

Unification is currently in the stage of fleshing out their testnet, and just starting on the C++ port for the mainnet. It looks like they’re getting all features prototyped and tested in the Python version before porting it to C++, which is something I do often for my personal projects as well.

There doesn’t seem to be any competitors with the same amount of depth in building and testing the entire system (including onboarding tools). As an advisor, I also get to see the team’s technical conversations every day in Slack — it goes much much deeper than the whitepaper. I’m comfortable with the tech.

Regarding this last point, Unification recently added Larry Gandt from Ripple to lead business development. Regardless of my opinions about Ripple, there’s no denying the quality of their enterprise partnerships. Looking forward to seeing similar level partnerships soon.

Update Sept 18: Unification has signed up partners in various industries including HintChain with 8.5M users and a few other companies. Additionally, there are some in the public sector which I’m really excited about but can not yet disclose.

Here are some interesting things that I’ve seen the team research: